Ah, another day. Some of it good, some of it bad. Right now I’m wondering why the internet in this hotel is so bad.

But I started the day at Pronto. The weather was iffy and there were fewer people out on the street, but more people in Pronto, including the dude. 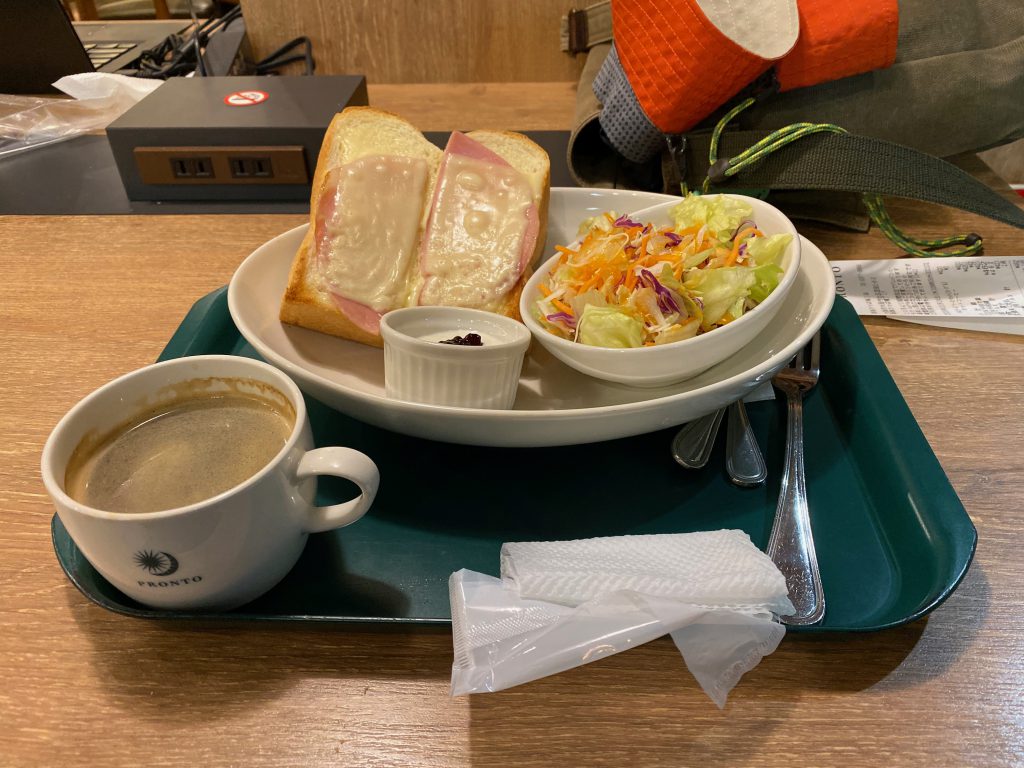 And I finally made it to the Glico factory and they let me in the gate. 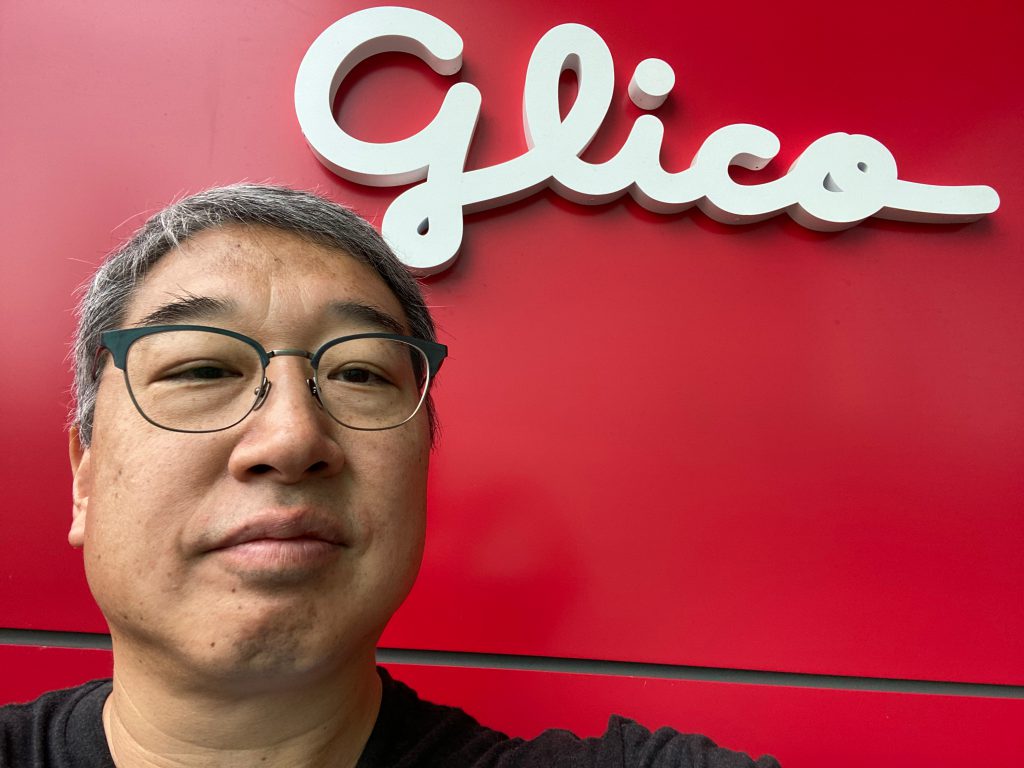 The museum is a whole second story of a building but they’re doing construction around it so you have to walk around the factory to get to it. That’s why you have to make a reservation to get in. It’s a nice mix of history of Glico, History of the founder, and commercials. They told me I only had an hour and I was there for the whole time I was allotted. A lot of it was watching old commercials because they were interesting. Here’s the history of Pocky. 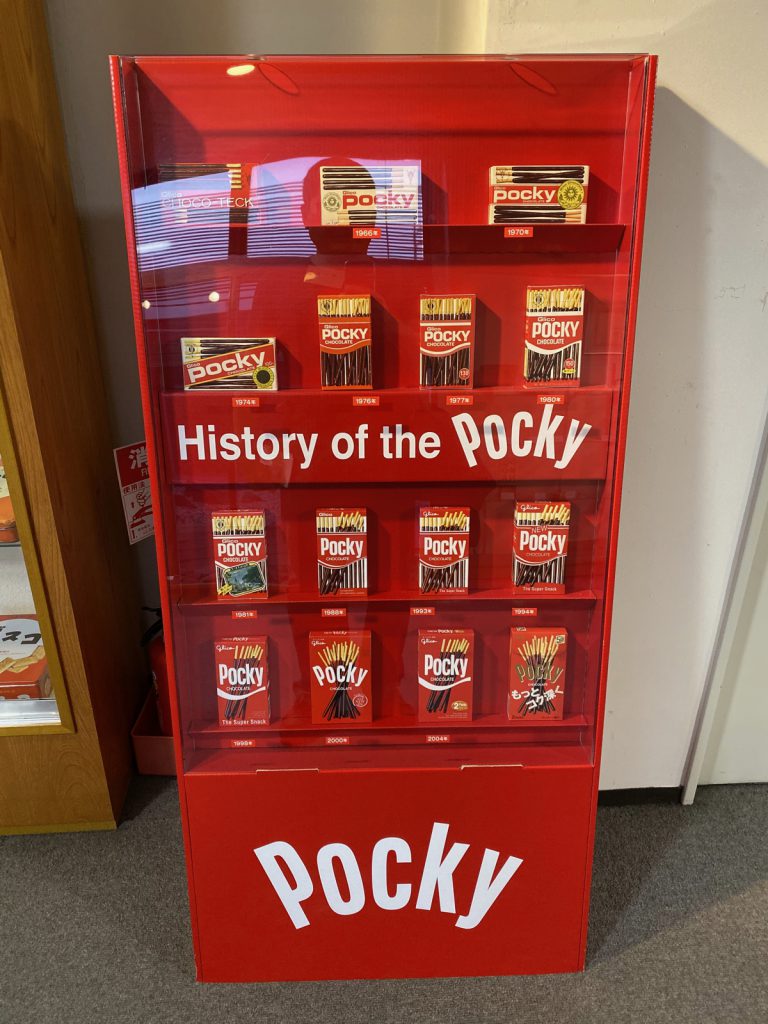 A diorama of the old Glico displays in Dotonbori.

They even had a much better display of the toys than the museum that was dedicated to the toys that I went to yesterday. 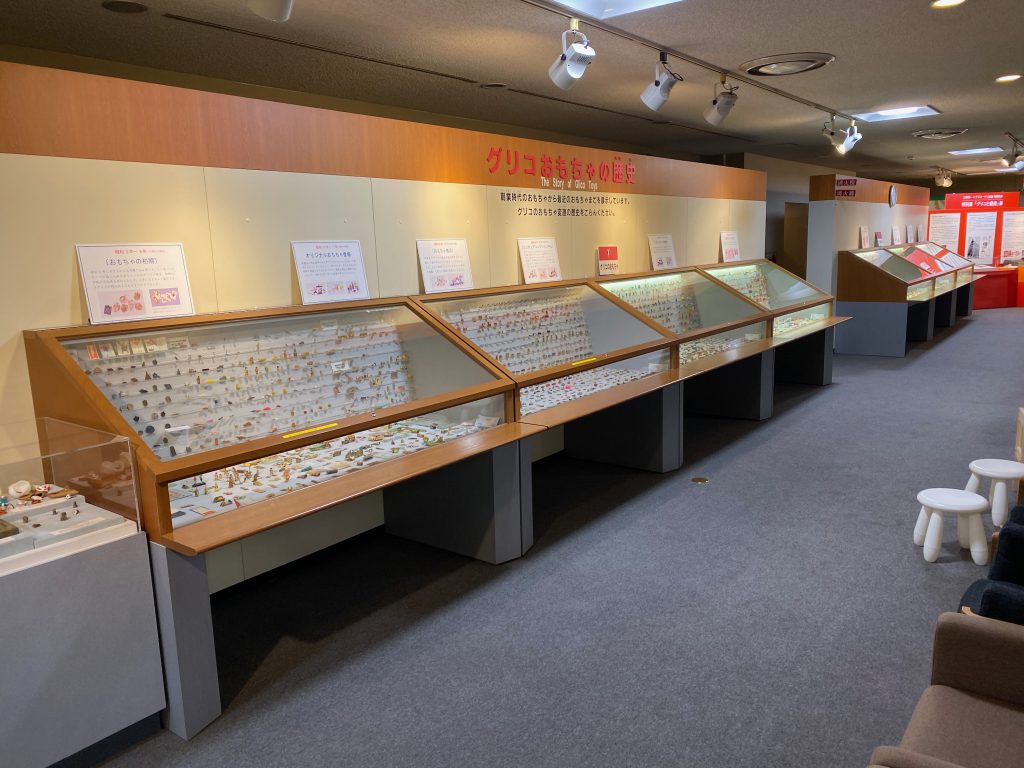 I’d say it was worth the trouble. It’s free, and they even give you a box of Glico caramels! I asked if there were a lot of kids and the guy escorting me out told me that it was mostly older guys my age and up. Ha. Lots of nostalgia.

My second stop was the waterworks museum because it’s open again and the last couple of times I went by it was closed. I got on a bus and a train and took the walk next to the highway in the wind and pouring rain. Guess what? IT’S CLOSED TODAY. Turns out it’s only really open on the weekends. 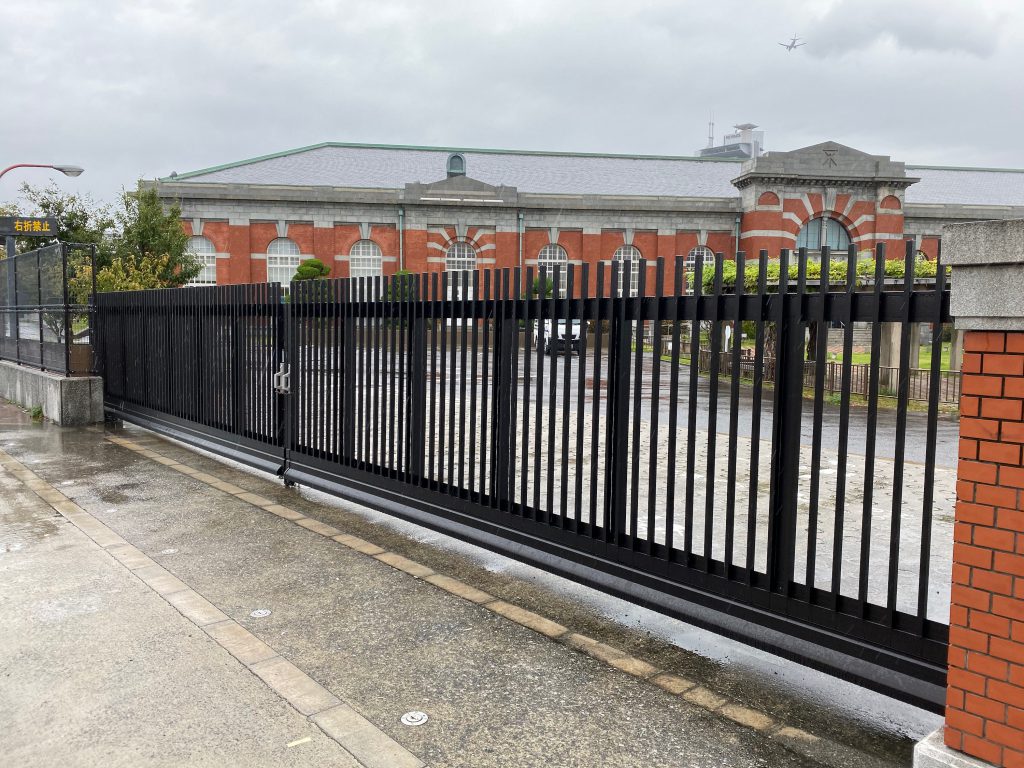 Well, crap. I decided to walk to Shin-Osaka, about 20 minutes away, and see if I could find the Glico store. The guy a the museum told me that’s about the only place you can buy swag. Turns out it’s just a three-foot-wide display of candy now and you can’t get anything but a Hello Kitty Glico pen.

Not much to eat either so I decided just to go back to Umeda. At this point I wanted something easy so I went to a place I’d been before, the Wired Cafe and got taco rice. 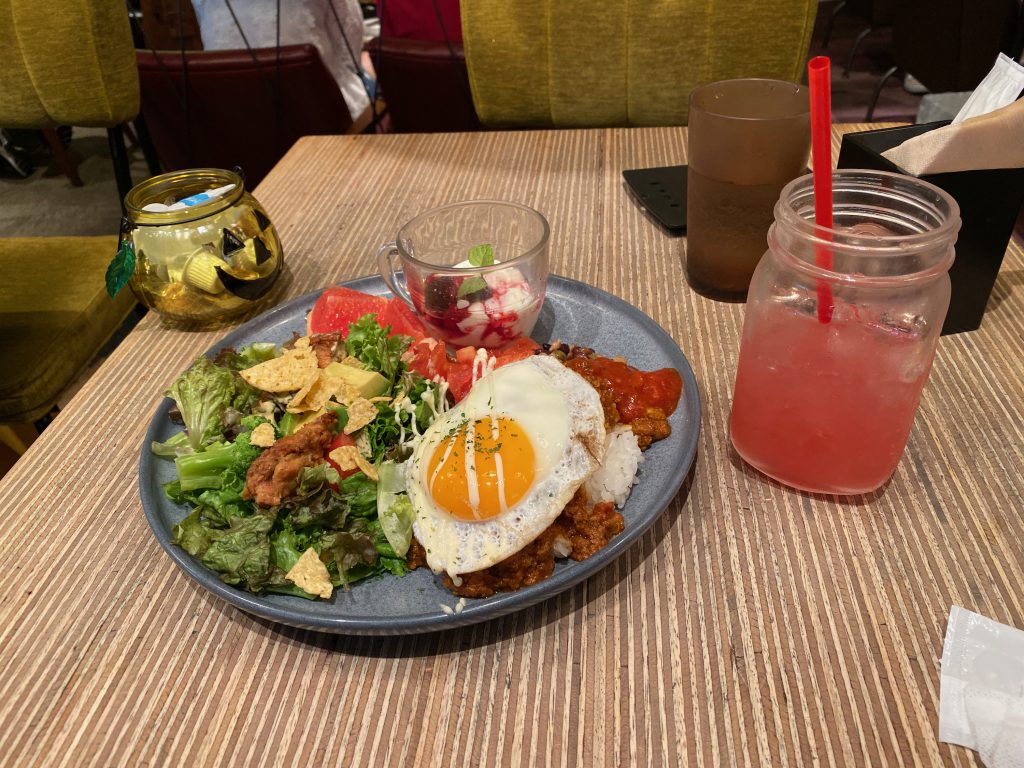 And after that my stomach started rumbling so I went back to the hotel and took a nap. My stomach isn’t in the best shape, but what do you expect with all the traveling and beer?

For dinner I was going to get okonomiyaki, but that sounded difficult (and hot) for some reason so I went to Baqet. OK food and all you can eat bread. The bread is only really good when it’s hot but they keep the oven busy and stuff comes out every 10-15 minutes. Here’s a croissant and the October specials, a tuna thing (at the top), a ghost and a mad chocolate roll.

I went for the salad and drink bar as well. 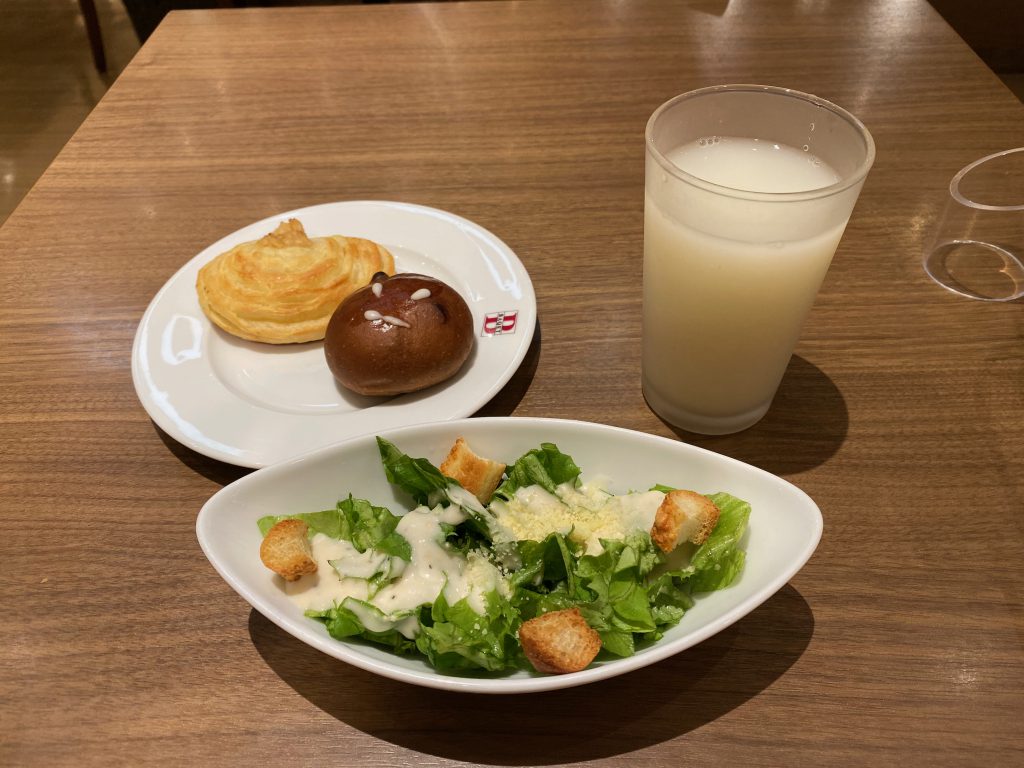 I thought I ordered the lasagna-style chicken but I got something else. It wasn’t bad so I just ate it. 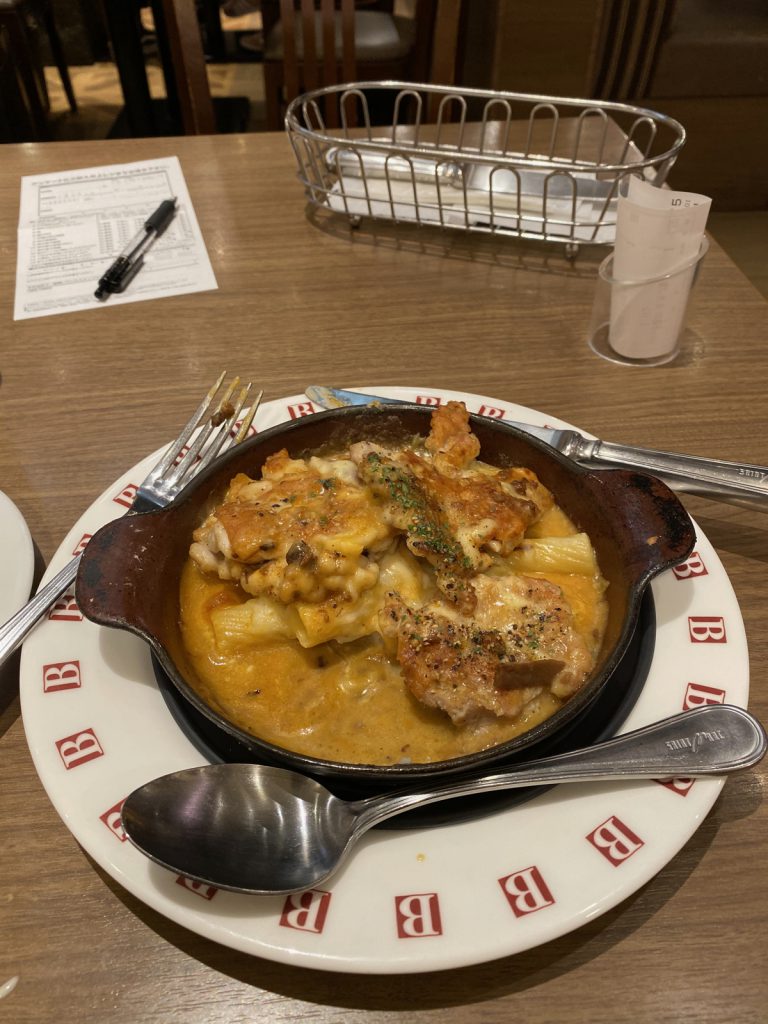 After that I went back to the hotel and tried to pare down all the brochures that were in my suitcase. I cut them way back and I still have a ton of them. I used to bring them back to show my mom but now that she’s gone I’ll probably look at them once and toss them anyway. I’m not sure why I’m carrying them around. Oh well.