Not many photos today. it was mostly a travel day, and raining at both ends of the trip.

I just had dinner from McDonald’s and it was AWFUL. I think they use more salt and less MSG here. And this is coming from a guy who has to keep himself from eating Mickey D’s less often than the several times a week he usually has it.

Anyway, I started out in Okinawa and it was a rainy day. It was only sprinkling for most of the day yesterday but at some point in the early evening it started POURING. It rained so hard that someone’s security light kept going on outside.

I actually slept pretty well although I woke up too early. Who wants to wake up before their alarm goes off and not be able to go back to sleep? Anyway, the fact that I slept so well makes me wonder if the heat and humidity are what my body wants. It would be pretty ironic.

Anyway, it wasn’t just sprinkling this morning so I just grabbed some food from the combini and stayed in to play with my computer all morning. Then I packed and got a cab to the airport because i didn’t want to walk around in the rain. I think I left the hotel around 10:45am.

The cab driver was a very interesting fellow who gave me his card. He also works as a tour guide from his cab and he was telling me all sorts of facts about the trip to the airport. I forgot to ask him why there weren’t more famous fish dishes in Okinawa.

I got to the airport quite early for my flight. They have an A&W here and I kind of wanted to try it but when I first got there the line was pretty long. 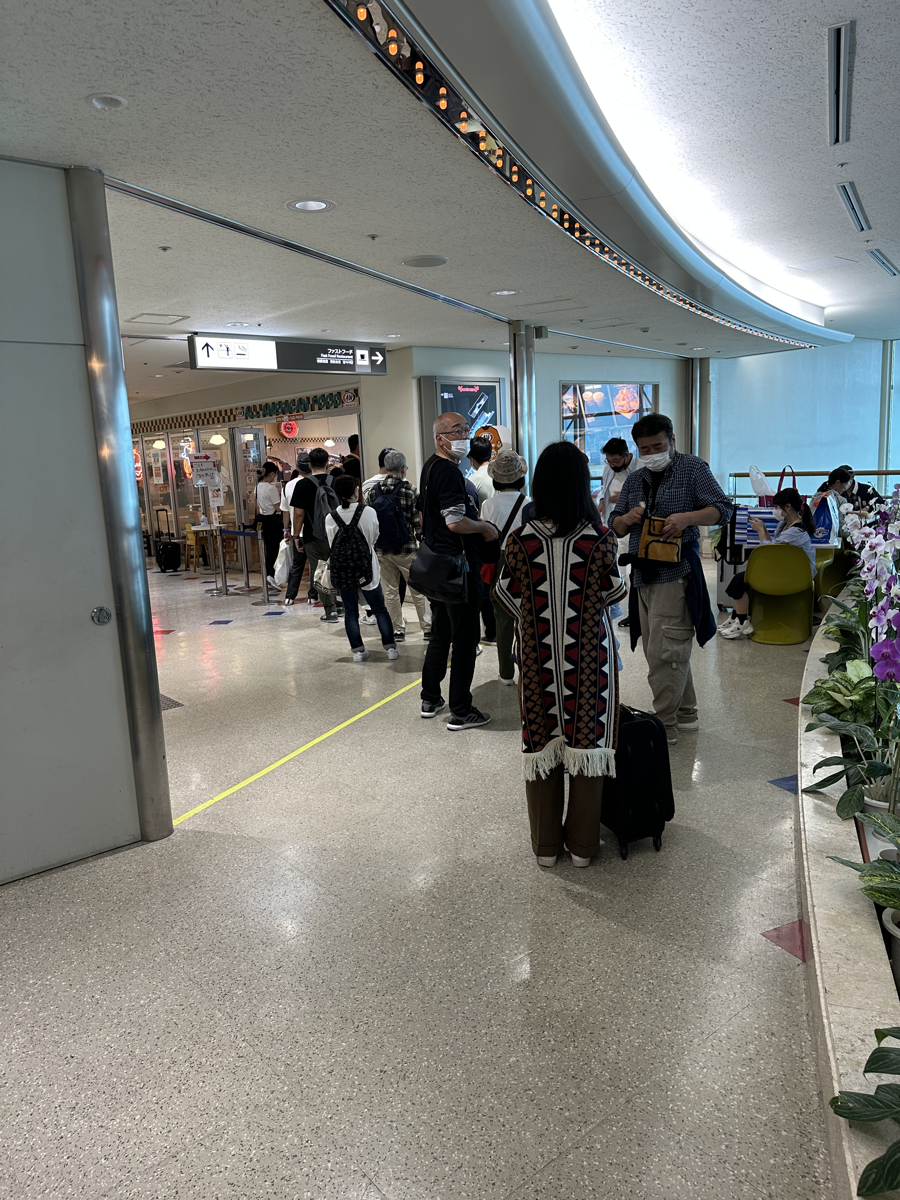 It just got longer as I wandered around. I wasn’t that hungry so I just got some snacks at the Family Mart and found some tables that weren’t too busy. And there were airport and airline employees eating their lunch here. The tables overlook the departure lobby, too, so there’s something to do. 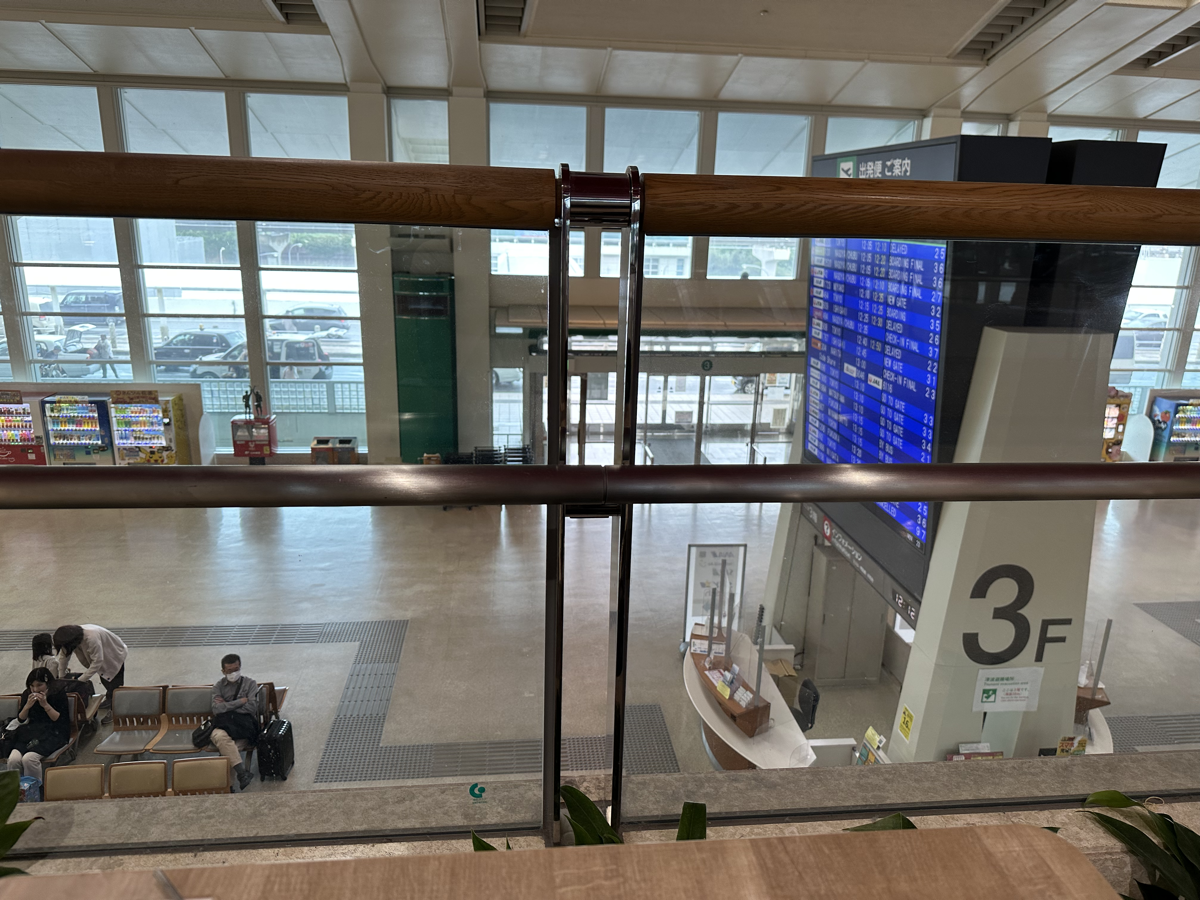 The picture isn’t very indicative of the crowds. This is between two packed counters. I’m not sure why there were several hundred people in line at ANA. There were a half-dozen checkin kiosks and no one was using them.

When I finally went to my gate, there was no one there and they were about to close the door on the departing plane. The sign on the board had my flight listed. The departure time was still an hour later, but I had to scramble to make sure they didn’t push up the flight time as I’ve encountered in past travels. No, they just changed the sign very early to panic me.

The last picture of the day is the mini-Coke I found at the airport. They used to sell this size exclusively in Japan, that is, this is the only size I could find when I was younger. I wanted a mini-Coke several times during this trip but this was the first time I found it. It was also the same price as a “full-sized” 350ml Coke. 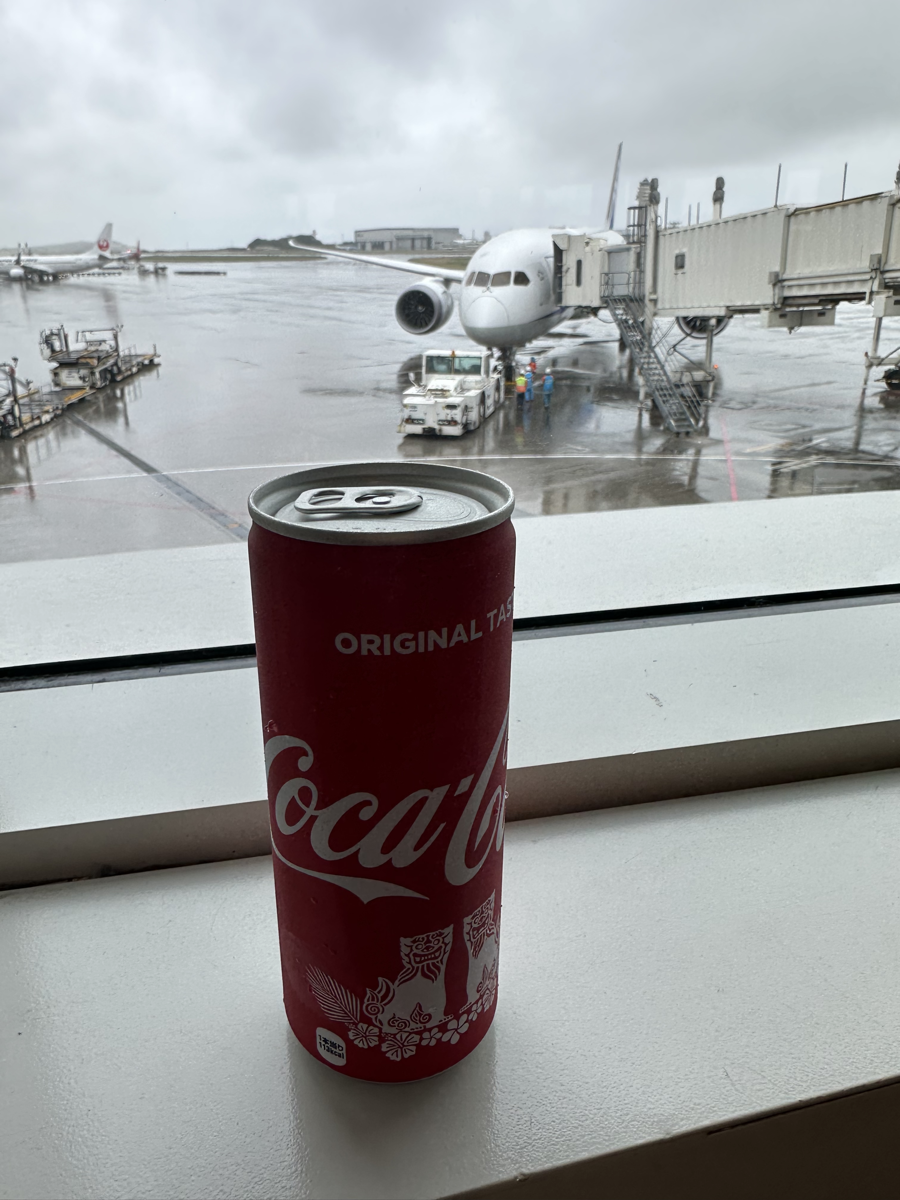 The plane trip took about 2 ½ hours and there was nothing much to do on the packed 777-300, a plane I’ve always been afraid to fly on. The flight was a little bumpy too. Fortunately I finally remembered there are card games on my iPhone and when it wasn’t too bumpy I reconfirmed that I’m even bad at Solitaire.

It was properly raining in Tokyo too. I was going to take a taxi but before I could find the taxi line I saw that a bus was leaving for Shinjuku and even stopped at my hotel. I got in my room around 6:15pm, and that included weaving my way through a bunch of Chinese tourists who wouldn’t know a line or waiting for their turn even if it smacked them in the face. I suppose they were from other countries like Singapore, but what do I know?

Oh, and I got the two pieces of luggage I had shipped here but the intern kept taking the wrong slip for their records (it’s a multi-carbon form and they have to keep one of them for some reason.) They even called my room and apologized and came and got the form they gave me in the first place but then swapped me for because they were so confused. I just gave him ALL the copies because I was going to throw them away anyhow. He can put them in his binder or whatever he wants to do with them. Maybe SPINDLE them.

I had to navigate the Chinese tourists to try to borrow an umbrella. I was afraid someone would steal the umbrella because, well, that’s one of the only things they seem to steal here in Japan. That and bicycles. It stressed me out so much that I went to Mickey D’s for the awful takeout food I mentioned (even the fries weren’t great) and popped into a Family Mart to grab a bottle of water. SOMEONE STOLE THE GODDAMN UMBRELLA FROM THE FAMILY MART. Well, I remember what they told me in Osaka when I lived there and just grabbed someone else’s umbrella.

I got back to the hotel and asked the front desk about the umbrella and told them what I had done. The kid actually laughed and said, “I’m going to pretend I didn’t see anything.”

Anyway, I’m back in Tokyo. People seem to love this place but it’s just a place with lots of stuff. The food isn’t the best, there’s too many people, and if I ever move back to Japan this won’t be the place I live. But it can be fun and makes for lots of stories.